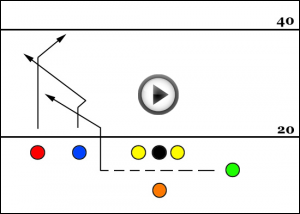 Play Theory: Adding motion to your formations can aid in figuring out how the defense is playing. Think about college and NFL games. Many teams have plays where the receiver will go into motion and half way across the field return to his original position. In most instances, this is to provide the quarterback information on whether the defense is playing man or zone. In flag football, most defenses are zone. If you lined up with this play in trips, the defense would set up accordingly pre-snap. The motion gives the defense a twins look, then shifts into trips. You can a breakdown a defense that stays put and does not shift.

Tip: With Red’s route, you want it to be a fast route (either a streak or post). The post is preferred as it takes the safety further away from where Blue will catch the ball.