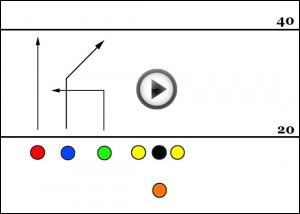 Play Theory: This depends on the defense. Against a Cover 3, Green will be open on the out (3 route). Against a Cover 2, then either Red or Blue will be open. The theory behind this play is to eventually put the safety in a choice situation where either Red or Blue will be open. If the defense continues to play a Cover 2, then offense can work up the field, hitting Green for good chunks of yards. Using the Passing Tree naming convention, this play would be called, “Trips Left – 983”.

If the quarterback has time against the Cover 2, a pump fake could lead to a big play. The safety will be responsible for both Red and Blue as both will be in his zone.  A pump fake to Blue should draw the safety in allowing the deep pass to Red to be open.

For other free flag football plays, visit the Free Plays section. You can subscribe to this site on the right side and receive new plays in your email or RSS reader.

7 Man The key to this play is recognizing how the Cornerback plays Red and Blue. If he drops into coverage and sticks with Blue, then Green will be wide open underneath. However, if the defense is playing a more traditional zone and the Cornerback stays home (covers Green). Then once the Safety turns to…